The saying rings true: “Custom and innovative solutions designed and manufactured globally for over 100 years.” But before the tagline was even thought of, years of product development, strategic testing and successful implementation of shock control and vibration isolation products gave Fabreeka its place on the map.

In an original document from the company’s Certificate of Incorporation, the stakeholders addressed the Commonwealth with the following declaration: “We, whose names are hereto subscribed, do, by this agreement, associate ourselves with the intention of forming a corporation according to the provisions of chapter 437 of the Acts of the year 1903, of the Commonwealth of Massachusetts, and the acts in amendment thereof and in addition thereto. The name by which the corporation shall be known: FABREEKA BELTING COMPANY.”

The stakeholders went on to declare that the purpose of the corporation was to manufacture and sell belting. Fabreeka Belting Company settled at 30 India St., Boston, Mass. before moving to a variety of locations expanding and also expanding to New York City, Chicago and Philadelphia by the mid-1920s. In a 1925 advertisement from "Hendricks' Commercial Register," Fabreeka Belting, one of Fabreeka’s first products, was described as, “A product that has made a legion of friends — through the sheer merit of its performance.” And it’s true — Fabreeka did make “a legion of friends.” 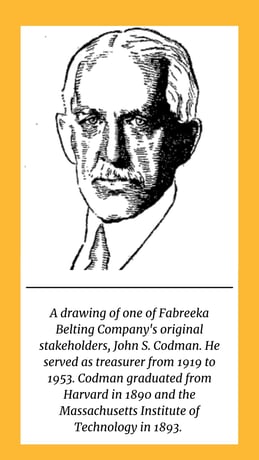 In a 1920 National Laundry Journal, a variety of letters titled “What Fabreeka has done for some laundries,” were written out by customers who used the belting product. Holland Laundry Company out of Chicago Ill. wrote, “...FABREEKA belting is all that could be asked in belting.”

“We have used your belting in our wash-room since the first of the year and find that it does not slip, stretch or shrink, and has given us no trouble whatever,” the laundry company added.

Other individuals who wrote in said Fabreeka “outwears any other belt” and described the product as “very satisfactory.”

In an original patent from the Official Gazette of the United States Patent Office published in 1933, a representative of Fabreeka Belting Company, Reginald Reynolds, wrote about the method of producing belts. 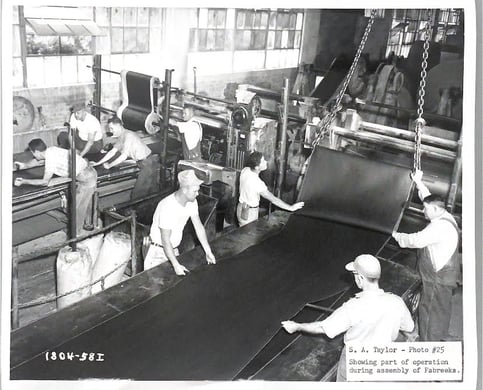 The product described by Reynolds was used in a variety of industries -- from fan belts for the automobile industry to conveyors for a variety of manufacturers such as candy plants and cotton mills.

Fabreeka Belting, was described as waterproof, weather-proof, steam-proof, acid-resistant, pliable, strong, dense, and more. Above all, it was the foundational product that ignited over 100 years of future product development.

Although Fabreeka is no longer in the belting industry, we admire our roots. Today, we’ve expanded our reach across numerous industries to provide state of the art vibration isolation and shock control solutions for countless applications, worldwide.

To learn more about Fabreeka’s history, products and applications subscribe to our blog so you don’t miss our upcoming posts.

Rail Track Repair: How to Reduce Damage on Railroad Tracks

Since the dawn of the Industrial Revolution, railroad tracks have revolutionized human expansion, developing an interconnected network for people and valuable goods...

If you had to summarize Fabreeka’s entrance to the mining industry in one word, it would be grand. In 1971, Fabreeka pad was installed on the world’s largest shovel...